عربي
Request a Call Back

You can also call us:

The Architectural Marvels That Everyone Should Visit in Abu Dhabi

From well preserved historical buildings to modern architectural masterpieces, Abu Dhabi, the cultural hub of the UAE, is a prime destination for those looking for a truly immersive mix of both the old and new. Here, historical palaces are restored to their former glory and architectural dreams become a reality. And whether you call Abu Dhabi home or you’re just visiting, you will find inspiring buildings that introduce you to a rich heritage of art and culture, and that make for some great photo opportunities.

Ready to explore? Here’s our roundup of the must-see architecture marvels in Abu Dhabi that will leave you speechless.

There are few places in the world that will have you talking long after you leave them. Sheikh Zayed Mosque, also known as the Grand Mosque, is one of those places. In a typical message of tolerance that the UAE is known for, this eclectic wonder of modern Islamic architecture embraces visitors of all faiths. During Eid, the mosque can welcome up to 40,000 worshipers.

Pro tip: The Grand Mosque has beautiful details that you shouldn’t miss, such as the intricately detailed domes, the largest prayer rug in the world and the central courtyard where you will find the world’s largest marble botanical mosaic!

Travel back in time, to the 18th century and relive history as it happened when you visit Abu Dhabi’s oldest stone building, the majestic Qasr Al Hosn. Built initially as a watchtower for traveling bedouins, it later became the seat of the government. Today the fortress has been restored to its former glory and has been turned into a museum in 2018.

Why visit it? In addition to artifacts dating back as far as 6000BC, Qasr Al Hosn holds the valuable collective memory of Abu Dhabi and recounts the story of its transformation from a fishing and pearl settlement into a major city where peace and economic prosperity abound.

If you’re looking to treat your eyes to some of the most exquisite art in the world, then we suggest you make your way to The Louvre Abu Dhabi. Designed by the acclaimed architect Jean Nouvel who is known for his outlandish designs, The Louvre Abu Dhabi resembles an intricately designed dome that seems to be floating on water.  The Louvre holds art pieces from all walks of the planet making it a real bridge of culture between civilizations.

Family tip: Kids will love it too here. In fact, a special section has been dedicated for them where they can learn about different concepts including the ancient falaj water system (aqueducts).

Pack some sandwiches and cold drinks and take your family on a road trip to the magnificent Al Jahili Fort in Al Ain. Built in 1890, the fort - one of the biggest in the UAE -  brought peace to the area in the past and served as a home for the ruling Al Nahyan family. Today, this historical edifice showcases the uniqueness of local architecture while introducing visitors to the local culture and traditions.

Did you know? Traditional architecture is strongly represented in the villa designs at Jubail Island. Moreover, the project is committed to promoting the heritage of the UAE by introducing visitors to the richness of the mangroves ecosystem in the Jubail Mangrove Park.

An architectural tour will surely take you around Abu Dhabi’s most glittering buildings and historical landmarks and it might be easy for you to overlook a bridge. That would hardly be the case with Sheikh Zayed Bridge, the ultramodern waving structure that was designed by the late genius architect Zaha Hadid. Soaring up to 60m over the Maqta channel, Sheikh Zayed Bridge evokes cascading sand dunes and stretches out for 842m, providing a 4 lane highway for the residents of the Emirate.

Often described as the most complex bridge ever built, Sheikh Zayed Bridge is best seen from a distance at night, when it stands out with a vivid light display that flows across its fluid structure.

Perfection! That’s something you will say to yourself quite often when you visit Qasr Al Watan. From its flawlessly manicured gardens to its lavishly decorated interiors, this governmental palace is the “the crème de la crème” when it comes to Arabian craftsmanship and artistry. Open to the public in 2019, “The Palace of the Nation” spans over 380,000 square kilometers and encompasses a large number of elaborately decorated rooms, such as the Great Hall with its 37 metres diameter dome, the majlis and the House of Knowledge.

Do not miss that! Visit Qasr Al Watan in the afternoon and stay till 7:30 PM so you can watch a bedazzling 15 minute sound and light show about the history of the UAE.

If you take a walk on the corniche, It will be hard for you not to pause and enjoy the splendor of Etihad Towers. The 5 towers complex that defines Abu Dhabi’s skyline is a dramatic architectural statement and a reference for luxury living and shopping in the city.

Pro tip: Rise 300 meters above the city and enjoy uninterrupted views in the Observation Deck at 300 which is located on level 74 in the second tower.

You don’t have to travel to Italy to see a leaning tower. Purposely engineered to slant 18 degrees, the gleaming Capital Gate tower has dethroned Pisa, and was recognized as the "world's furthest leaning man-made tower" by Guiness Records in 2010.

Photo idea: Test your Matrix lean moves when posing in front of this unique tower, or just hold it firmly with both hands. 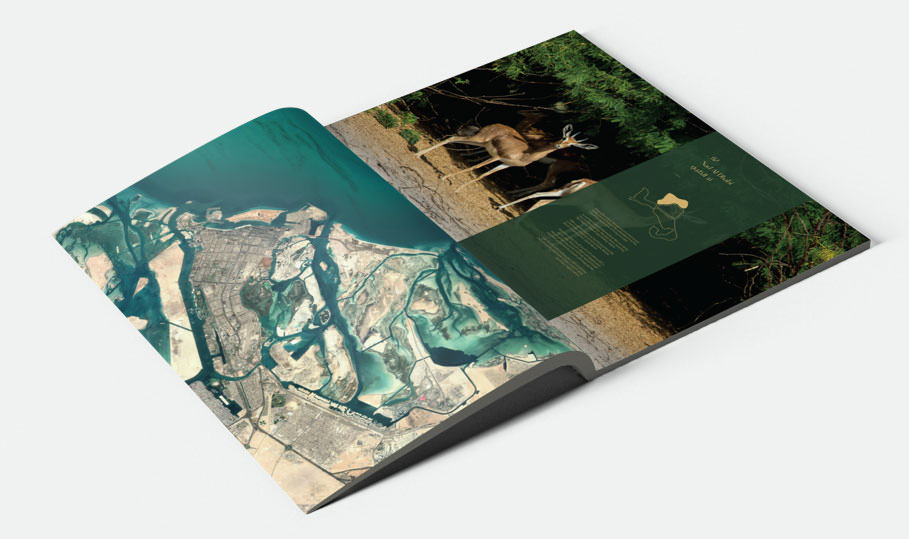 Be Part of Jubail Island